"The rose plant itself is said to be around 35 million years old; it has a very long history as a symbol for love and beauty and for politics and war. Cultivation of roses began some 5,000 years ago, probably in China. During the Roman period, they were used as confetti at celebrations, for medicinal purposes, and as a source of perfume. Roman nobility established large public rose gardens in their cities." 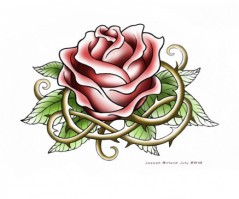 “I feel as if I had opened a book and found roses of yesterday sweet and fragrant, between its leaves.”

—  L.M. Montgomery, Anne of the Island